The Magna Carta Society Limited was formed on February 14th 2000 to draw
attention to the conflict between the Magna Carta, the Declaration and
Bill of Rights and Common Law, and our supposed membership of the
European Union. Our case, set out in the pamphlet "Defence of the Realm"
(written and copyrighted by Ashley Mote) explains in detail the basis on
which EU involvement can and should be challenged in the courts, and how
our Constitutional safeguards have illegally been brushed aside for
thirty years.

Founder members decided that the Society should have a formal basis as a
Company Limited by Guarantee, and that full Membership of the Society
should be limited to the founders and any individuals invited to join at
a later stage. Others who have supported us, whether financially or
otherwise, have been enrolled as Friends and Supporters of the Society,
free of any responsibility for the conduct of the Society, and any
personal liability for its actions.

In a few short months we have achieved significant success by way of
parliamentary questions on the euro, the Nice Treaty, mutual recognition
of corpus juris, the use of the EU flag on public buildings, and we have
initiated action on the question of citizenship.  We have also had
numerous letters in the national and local press, articles in many
journals and there are some indications that the fundamental issue of
the illegality of the EU treaties has been gaining public support.

However, our work has been severely hampered almost from the beginning
by the activities of a small minority of dissident Members/Shareholders
of the Society.

We have tried our utmost to contain these problems, and indeed have been
assured at least five times over as many months that the problems would
end, so that we could concentrate our fire on the real enemy. However
every one of those assurances has been broken within days. We, the two
Officers of the Company, have finally and with great reluctance been
forced to conclude that there is no longer any prospect of the Society
being able to achieve its objectives and that it would therefore be
inappropriate to continue, and in particular to seek financial support
from others. Thus, in accordance with company law and legal advice, we
have taken steps to close down the Company with immediate effect. Those
who have, most generously, sent donations or subscriptions are receiving
pro-rata refunds and copies of the financial statements. Contributions
received or processed after August 18th will be returned in full.

Despite these problems, which we greatly regret and which we fought hard
to overcome, we firmly believe in our cause and will continue to argue
it at every opportunity, albeit as individuals. We will however play no
part in any new organisation which might emerge, and while we welcome
any and all competent and legitimate efforts to further the Society's
objectives, must point out that no individual or organisation may
represent itself as being a continuation of this Company in any way.

For the record, Ashley Mote hereby asserts and gives notice of his right
under section 77 of the Copyright, Designs and Patents Act 1988 to be
identified as the author of the pamphlet entitled "Defence of the
Realm", copies of which have been lodged with the relevant copyright
libraries.


For and on behalf of the Magna Carta Society Limited. 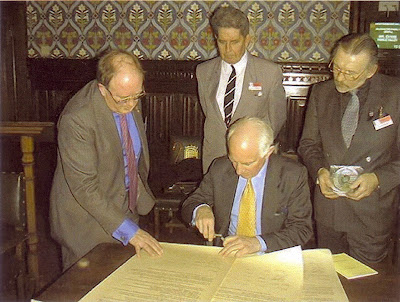 FOUR peers invoked ancient rights under the Magna Carta yesterday to petition the Queen to block closer integration with Europe.
The Duke of Rutland, Viscount Masserene and Ferrard, Lord Hamilton of Dalzell and Lord Ashbourne were imbued with the spirit of the ancient Charter, thrust on King John in 1215. In accordance with the Charter's Clause 61, the famous enforcement clause, the four presented a vellum parchment at Buckingham Palace, declaring that the ancient rights and freedoms of the British people had to be defended.
The clause, one of the most important in the Charter, which was pressed on King John at Runnymede, allows subjects of the realm to present a quorum of 25 barons with a petition, which four of their number then have to take to the Monarch, who must accept it. It was last used in 1688 at the start of the Glorious Revolution.
The four peers, who were all thrown out of Parliament in November 1999, proved they had that quorum by presenting Sir Robin Janvrin, the Queen's private secretary, with the petition signed by 28 hereditaries and letters of support from another 60. In addition, they claim the support of thousands of members of the public.
They say that several articles in the Treaty of Nice agreed by Tony Blair in December will destroy fundamental British liberties. The Queen has 40 days to respond. Under the Magna Carta's provisions, if the Sovereign does not observe the Charter the people may rise up and wage war on her, seizing castles, lands and possessions until they have redress.

I hope this helps to clarify the facts that seem to have confussed every liar, cheat and rascall who has tried to deceive people into believing that I was in some way connected with the demise of this organisation.
My actions were merely to support my friends Ashley Mote & Idris Francis in their efforts to present a petition together with Barry Ashdown (Lord Ashdown) and others.
Besides other contributions I made was to find web hosting for the Company with my old friend and associate Mark Oliver who owns and has run, since its inception The Silent Majority web site - primarily as a web resource for EUroRealists and EUroSceptics - which for its day was without a doubt the most comprehensive and edgy available.
I am flattered that in other areas of his web site he felt it apposite to publish a number of essays, letters and opinions which I wrote - these documents are still available at:
http://www.SilentMajority.co.UK


To View The MAGNA CARTA
.
in picture and modern English translation
.
CLICK HERE