Convinced that the reconciliation of the German people and the French people, ending a centuries-old rivalry, constitutes an historic event which profoundly transforms the relations between the two peoples,
Aware of the solidarity uniting the two peoples, as much from the point of view of their security as from the point of view of their economic and cultural development,
Noting in particular that youth has recognised this solidarity and is called upon to play a decisive role in the consolidation of Franco-German friendship,
Recognising that a reinforcing of cooperation between the two countries constitutes an indispensable stage on the way to a united Europe, which is the aim of the two peoples:

Have given their agreement to the organisation and principles of cooperation between the two States such as they are set out in the Treaty signed this day.

Following the joint declaration of the President of the French Republic and the Chancellor of the Federal Republic of Germany, dated 22nd January 1963, on the organisation and principles of cooperation between the two States, the following arrangements have been agreed to:

1. The Heads of State and Government will give the necessary directives in accordance with needs and will follow regularly the application of the programme fixed hereafter.
They will meet to this effect each time this will be necessary and, in principle, at least twice a year.


2. The Foreign Ministers will supervise the execution of the programme as a whole.
They will meet at least every three months.
Without prejudicing contacts normally established through embassies, high officials of the two Foreign Ministries charged respectively with political, economic and cultural affairs will meet each month alternatively in Paris and in Bonn to assess current problems and to prepare the meeting of Ministers.
On the other hand, the diplomatic missions and the consulates of the two countries, as well as their permanent representation at international organisations, will make all contacts necessary on problems of common interest.


3. Regular meetings will take place between the responsible authorities of the two countries in the fields of defence, education and youth. They will in no way affect the functioning of already existing organisms -- the Franco-German Cultural Commission and the Permanent Staff Group -- whose activities will, on the contrary, be developed.
The Foreign Ministers will be represented at these meetings to ensure the overall coordination of cooperation.

(a) The Armed Forces or Defence Ministers will meet at least once every three months. Likewise, the French Minister of Education will meet according to the same rhythm, the individual who will be designated on the German side, to follow the programme of cooperation.

(b) The Chiefs of Staff of the two countries will meet at least once every two months. Should they be unable to attend, they will be replaced by their responsible representatives.

(c) The French High Commissioner for Youth and Sports will meet, at least once every two months, the Federal Minister of Family and Youth or his representative.


4. In each of the two countries an inter-ministerial commission will be charged with following the problems of cooperation.
It will be presided over by a high official of the Foreign Ministries and will include representatives of all the interested administrations.
Its role will be to coordinate the action of the interested ministries and to make periodically a report to its government on the state of Franco-German cooperation.
It will also have the task of presenting all useful suggestions with a view to the execution of the programme and its extension to new fields.


1. The two Governments will consult before any decision on all important questions of foreign policy and, in the first place, on questions of common interest, with a view to reaching as far as possible an analogous position.
This consultation will bear among others on the following subjects:

° Problems relating to the European Communities and to European political cooperation;

° East-West relations both on the political and the economic planes;

° Matters dealt with within the North Atlantic Treaty Organisation and the various international organisations in which the two Governments are interested, notably the Council of Europe, the Western European Union, the Organisation for Economic Cooperation and Development, the United Nations and its specialised institutions.


2. The collaboration already established in the field of information will be continued and developed between the interested services in Paris and Bonn and between missions in third countries.


3. With regard to aid to developing countries, the two Governments will systematically compare their programmes with a view to maintaining close coordination.
They will study the possibility of undertaking joint projects.
Several ministerial departments being competent for these questions, on the French side as on the German side, it will be for the two Foreign Ministers to determine together the practical bases of this collaboration.


4. The two Governments will study jointly the means of reinforcing their cooperation in other important sectors of economic policy, such as agricultural and forestry policy, energy, the problems of communications and transport and industrial development, within the framework of the Common Market, as well as the policy of export credits.


I. The aims pursued in this field will be the following:


1. In the field of strategy and tactics, the competent authorities of the two countries will endeavour to bring their doctrines closer together with a view to reaching common conceptions. Franco-German institutes of operational research will be set up.


2. Exchanges of personnel between the armies will be increased.
They will concern in particular instructors and students of the general staff colleges.
They can include the temporary detachment of entire units.
In order to facilitate these exchanges, an effort will be made by both sides with a view to the practical teaching of the languages of the trainees.


3. With regard to armaments, the two Governments will endeavour to organise work in common from the stage of drawing up appropriate armaments plans and of the preparation of plans for financing them.
To this end, mixed commissions will study current researches on these plans in the two countries and will present proposals to the ministries who will examine them at their quarterly meetings and will give the necessary directives for application.


II. The governments will institute a study of the conditions in which Franco-German collaboration can be established in the field of defence.


As regards education and youth, the proposals contained in the French and German memoranda of 19th September and 8th November 1962, will be studied on the lines set out above.


1. In the field of education, efforts will be concentrated mainly on the following points:

(a) Language teaching:
The two Governments recognise the vital importance that knowledge of each other's language in each of the two countries holds for Franco-German cooperation.
They will strive, with this aim in mind, to take concrete steps to increase the number of German schoolchildren learning French and the number of French schoolchildren learning German.
The Federal Government will examine with the Governments of the Lander (states) who are responsible in this sphere, the possibility of introducing a system which will permit achievement of this aim.
In all establishments of higher learning it will be of advantage to arrange practical instruction of the French language in Germany and of the German language in France, open to all students.

(b) Problems of equivalences:
The competent authorities in both countries will be asked to speed up the adoption of arrangements ensuring that terms of study, examinations, university awards and diplomas correspond.

(c) Cooperation on scientific research:
Research organisations and scientific institutions will develop their contacts beginning with the fullest possible exchange of information.
Coordinated research programmes will be set up in disciplines where this is feasible.


1. The necessary directives will be issued in each country to implement immediately everything mentioned above.


2. The two Governments will keep member Governments of the European Communities informed of the development of Franco-German cooperation.


4. The two Governments can make those arrangements which appear necessary for the implementation of the present Treaty.


5. The present Treaty will enter into force as soon as each of the two Governments has informed the other that the conditions necessary for this in either country have been fulfilled.

Drawn up in Paris, on 22nd January 1963, in two copies, in French and German, both texts being equally valid. 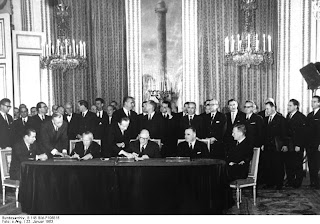 The Chancellor of the Federal Republic of Germany
Adenauer

The President of the French Republic
C. de Gaulle

We must work together to liberate these United Kingdoms from the undemocratic, corrupt, centralised, unaccountable and allien EUropean Union, which has been so damaging to Britain both in cost and destruction of our values, industry, commerce, governance, defence, British Justice, Commonwealth, borders & the Anglosphere.

No trustworthy politician has EVER provided a single solitary benefit of membership of The EU which justifies the £1.8 Million / Hour cost or loss of self determination and foreign or trade policy.

We All Know the benefits for politicians of the feeding troughs on The EU Gravy Train and the corruption at Westminster, where MPs & Peers are not required to declare the identity of their EU paymasters when they debate or vote!
Posted by Greg_L-W. at 16:15